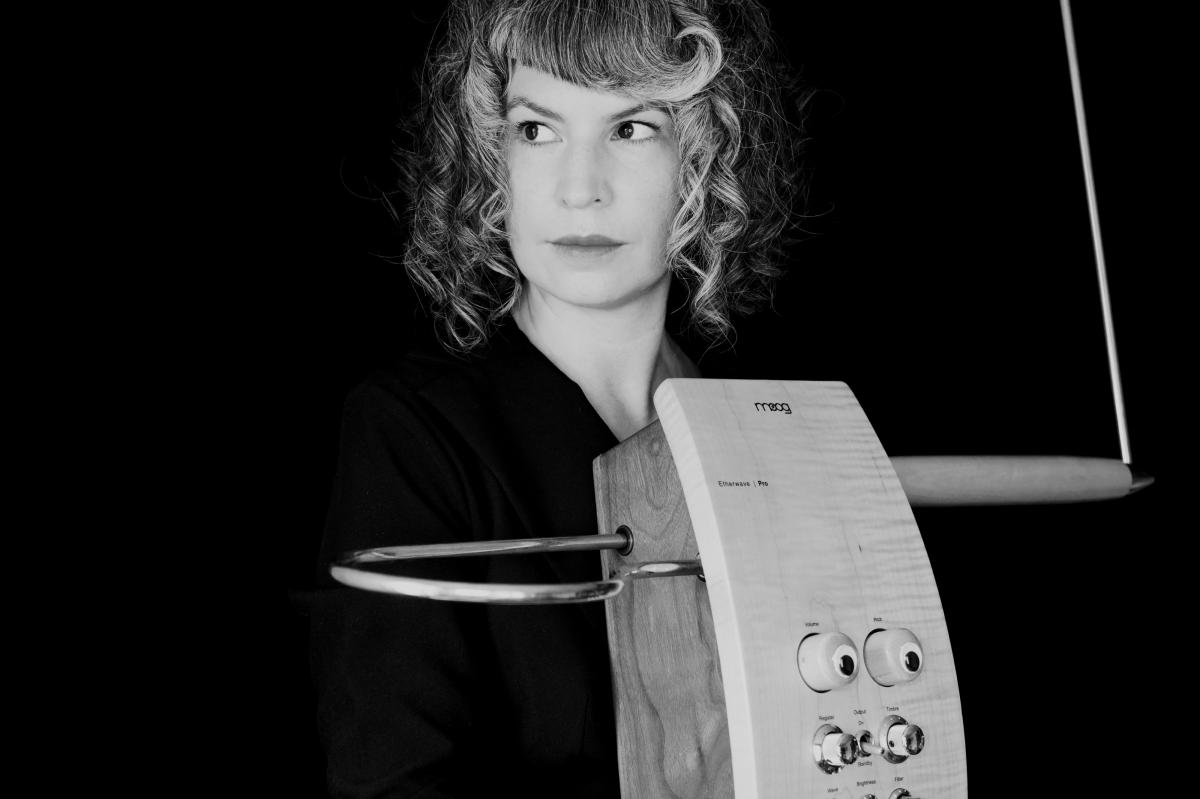 Coralie Ehinger lives and works in Lausanne, Switzerland. She is passionate about electronic instruments, in particular the theremin, her instrument of choice.

Very active in the theremin community, she created in 2007  the first French-language online platform dedicated to the theremin www.etheremin.com aand co-wrote An Introduction to the Theremin, which has been translated into several languages. She founded in 2009 the NODE, a theremin festival in Lausanne which, building upon its successes, became in 2012 the N/O/D/E, a festival dedicated to sound oddities, focused on synthesizers, science and electronic hack. The 6th edition took place in January 2018.

Coralie remained for a long time in the shadow of organizing events without really daring to touch any machines.  in 2016, she decides under the impulse of her brother (The Shamanics), to test a Buchla Music Easel and connect it with her theremin. A new world opens up to her and she finally finds her artistic wa , y. Since then, she uses her theremin not only as an instrument, but also as a controller, a synthesizer interface. She works in partnership with WaveLicker and WackyLab to develop specific tools. In 2018 a eurorack module called Thereminator was released by WaveLicker. It has been designed specifically for thereminists wishing to connect their theremin with their synthesizers.

Under the name of Therminal C, she fully deploys her artistic inspirations, both sound and visual. She creates, composes, records, edits videos and performs solo, including her theremin and modular synthesizer. Its particularity is the combination of more experimental electronic sounds (created on synthesizers and other effects pedals), with a melodious and classic theremin playing. An electronic dream, a delicate and intoxicating music, played 100% live.

Combining her musical knowledge and educational experience – she holds a degree in special education – she has worked to develop the didactic and recreational aspects of the theremin in the courses and conferences she offers in schools (Gymnase de la Broye, Genevan middle schools, etc.) and festivals (Montreux Jazz Festival, Electrosanne, Festival Electron, Présences Electroniques, etc.).

She has collaborated with several artists, featuring for example on the piece Long Live Paper & Scissors by the Lausanne-based band Fauve, Odieux and Si forte by Robert Sandoz (Robe) as well as Secret Garden by Xewin. Coralie Ehinger not only plays the theremin, but also the Matryomin, a small theremin built into a Matryoshka (Russian nesting doll). She is an official member of the Matryomin Ensemble Mable, a Japanese ensemble of Matryomin players, and has performed with them in Japan and during their European tour.

In 2016 she started two news projects : Koozebane, with Sylvain Ehinger, an all analogic and experimaental band, and AudioKino, with Sonia Biétry, a rather poetic and electronic duet. She aslo started a collaboration with French shadow wizard Philippe Beau, elaborating a shadow and musical performance called "Du Bout Des Doigts", co-produced by Gaîté Lyrique in Paris and supported by ProHelvetia.

An avid frequenter of conventions and electronic music events, she travels Europe regularly and has become the Swiss ambassador of the theremin.