Thereminal C is composed by a theremin - an instrument you play without actually touching it - and by a modular synthesizer with a lot of colourful cables. In the driver's seat, thereminist Coralie Ehinger creates a 100% live music, delicate, minimalist and poetic, executed with the fingertips, in the air.

Playing mesmerizing melodies with the theremin, while using the instrument's antennas electrical signals to control a modular synthesizer and pouring a flood of organic and synthetic sounds, is the basis of this fascinating solo project. The theremin thus becomes, in addition to an instrument, a controller, an interface for triggering and modulating sounds on a synthesizer.

A musical performance, an electronic dream.

Philippe Beau is a shadowgrapher : he produces and performs hand shadows. As he discovered the Theremin, he thought of creating a performance dedicated to the hand and its hability to danse in the air, creating music and shadow. He then contacted Coralie Ehinger and they met for a first improvisation in Paris  at  la Gaîté Lyrique, in February 2017. The first stone of the edifice was laid, the performance can start evolving and elaborating, thanks to the support of The Gaîté Lyrique et ProHelvetia. The première took place on La Gaîté lyrique main's stage, on the 29th October 2017.

"Our hands create sounds and images, Theremin and Ombromanie (Shadow making in French), two words that are somewhat similar and have the same approach: not touching anything, let your hands be "free". Free of movement, free to create in space and always in such a precise way. This concert / performance is also a tribute to the oldest electronic instrument and the oldest way to create an image. Two little-known and complementary disciplines. A choreography of a new kind : A Ballet with four hands, in freedom. " Philippe Beau

AUDIO KINO  I  duo with Soon B.

An enigmatic journey with symphonic VST, melodies, beats and analog electro sounds on board. A powerful alchemy that drags music into extravagant and shy contortions. From minimal inspiration to chaotic overabundance of sound, Audio Kino composes audacity with some malice.

A style that can not be explained, but that can be seen with ears, throughout the lock of the soul .. 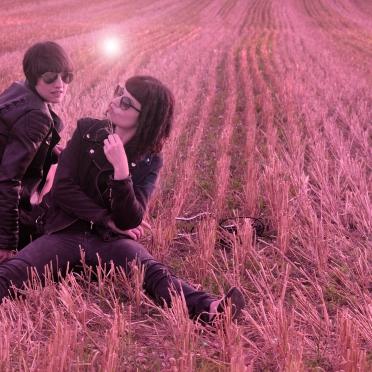